Twice a year, in the Spring and Fall, (so conveniently during the seasons when we are living in France!) the charming town of Pézenas, 10 minutes from us, hosts a huge antiques fair. It is such fun and we have never missed one, as long as we’ve been coming here! Brocante means vintage A Mecca […]

According to a list of the top 10 worldwide regional destinations to visit in 2018, which has just been released by Australia’s travel guide, The Lonely Planet, the ranking puts Languedoc-Roussillon in 4th position for its “various and varied charms: white sand beaches, sapphire waters, rustic markets and hills covered with maquis …” I thought […]

There are many houses in this region with ornamental, sculpted faces added to their façades. I love the way this personalizes homes – often with a bit of humor – and frequently with a jovial smile. Some of these faces are amazingly expressive. Most are quite old. Once you start looking for them, you find […]

Continue Reading "Here’s looking at you!"

Sunday lunch is a big deal in France. Everyone stops what they are doing to eat a long, slow and relaxing meal – usually with family and/or friends. It is a time to kick back and concentrate on good food, in the company of all generations, from babies to great-grandparents. Whether at home (grand–mère‘s house […]

We have been searching for a solution to our need of a small cabinet or shelves in our tiny master bathroom. The problem is, there’s not much space available in the room. The most logical spot for said storage unit is above the toilet, which is wedged into an acute angle in one corner of […]

We just brought home a precious piece of furniture – a panetière provençale. I have dreamed of having one of these for so many years, and am thrilled to finally have one to call our own! Before we found this gem, we had looked at quite a few that were either in poor shape, or ridiculously expensive. This week, […]

One of our favorite pastimes is wandering aimlessly through the countryside in France, both by car and on foot. And one of our greatest pleasures, while exploring, is seeing poppies everywhere. No matter where you are in France, from Spring into Summer, and then again in Autumn, poppies abound. One of my favorite combinations – wild poppies […]

One of the most pleasant places I know is the Abbaye de Valmagne, which happens to be conveniently located about 10 minutes from our town. This beautiful old abbey was founded in 1138 by Raymond Trencavel, Vicomte de Béziers, and was originally a Benedictine and then later a Cistercian monastery, but was in danger of being destroyed following the […]

Last Fall, we were at the house in Montagnac for five weeks, so we had a chance to relax and do some exploring that we hadn’t been able to do during our first time living there. Our first trip there (after we had bought the house) was jam-packed with back-to-basics decorating. This more recent trip, […] 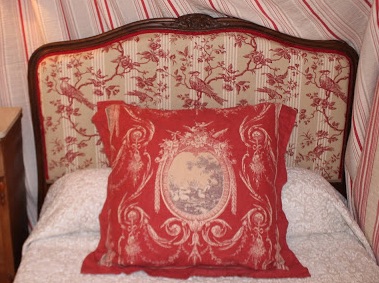 (Note: This story was first published on June 24, 2016.) The guest room at Le Bijou really needed new beds, more than anything else. The beds that we inherited were fine for a kid’s overnight camp and, well…enough said. The room also lacked any sense of personality. On a trip to one of our favorite […]