Sunday lunch is a big deal in France. Everyone stops what they are doing to eat a long, slow and relaxing meal – usually with family and/or friends. It is a time to kick back and concentrate on good food, in the company of all generations, from babies to great-grandparents. Whether at home (grand–mère‘s house in the country) or at a restaurant, Sunday lunch is not to be missed.

We have enjoyed so many fabulous Sunday meals in France over the years, and have never once walked away feeling anything but a glowing satisfaction that all is well with the world. Last Sunday was no exception. We drove to a restaurant we had been wanting to try, about an hour from our house, right on the banks of the Canal du Midi. We had not made a reservation, and as luck would have it (I mean that!) the last indoor table was taken by the couple who walked in just ahead of us. The weather was overcast, but we agreed to have a table set for us outdoors on the shaded terrace, and were soon joined by several other couples and families who enjoyed the meal al fresco.

L’Auberge de la Croisade has a long history. It began as a relais, a place to rest, water and change the horses that walked alongside the canal pulling the péniches (barges) that transported goods up and down the canal.

The owners, Bruno Plana (in the tie), who runs the salle (front of the house or dining room), and Bruno Rossignol (black chef’s jacket), who creates his magic in the kitchen, bought and renovated the Relais several years ago. Front-of-the-house Bruno is charming, funny and very buttoned up. His jovial but no-nonsence personality is a big part of the atmosphere here. The staff is augmented by Cachou, their scruffy and totally loveable chien (not showing his face for the camera, above).

Jack looking up at the shade trees just over our heads

As with most restaurants in France, the menu is an offering of what is fresh and in season. Sunday lunch here is limited to certain of their menus. Jack, the wiser member of our team, chose a simpler one. I, on the other hand, am never one to hold back when it comes to food, so I chose a fancier and longer menu, vowing to share with my wiser partner. Not mentioned on any of the menus was a delightful soup, served as an opening course. I kept eyeing the soup of the two ladies eating just inside the restaurant, and wanting to order it, but I could not find it listed. When I asked Bruno what it was, he replied with a twinkle in his eye that I would just have to wait and see. Happily, I realised that the soup would start my meal, no matter which of the set menus I chose.

As often happens, we were too excited about both the little tray of amuse-bouches that was delivered to our table, as well as with the soup, to remember to take pictures before we had devoured these goodies. Amuses-bouches are little tastes to awaken the senses and prepare your palette, mind and heart for the meal to come. Today, these were some tiny, savory, cheese and herb “cookies” as well as some local Lucques olives. The soup was a velouté of butternut squash, served with a dash of truffle oil and some fresh oregano sprinkled on top. There was just enough of each of these openers to make us long for the next courses to come.

All that was left of my squash soup

My first official course was house made pâté de foie gras, which was delicately laced with a hint of cinnamon. I drank a chilled glass of muscat with this, which is traditional. (Sauternes is too, but I’m not a huge fan of it.)

I shared this divine dish with Jack, and allowed Cachou, conveniently waiting under the table, to taste the fat.

Jack’s opening course was three different bouchées (mouthfuls) of smoked, grilled mackerel. One was marinated and cold. The other two were hot. These were presented on whipped potatoes with fennel in a lemon confit. Each little composition floated on a bed of crème de chèvre frais de Combebelle (a cream sauce made with fresh local goat cheese).

Next, I was served a dish of small filets of rouget barbet fish, on mashed potatoes made with squid ink and augmented with green crab butter. I was more than happy to share this with Jack, since he is a huge fan of squid, and I am not so much. The fresh pea shoots were a perfect foil for the salty seafood.

After all of this “starter” food, we “needed” a Trou Languedocien. This “hole” (trou) in the line-up of food is famously served at this point during big meals in the Languedoc, as a way to clear the palette for the next courses to come. The trou languedocien can vary from cook to cook, but always is a sweet granité or sorbet made with local alcohol. Today’s was made with sweet white wine and lemon. 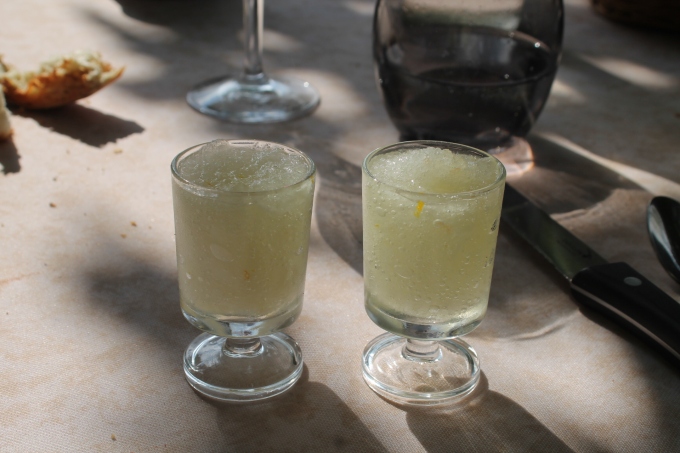 For my main course, I had chosen cerf (venison). We had a funny exchange with the couple at the table next to ours, about the different names of deer. Le cerf is the stag, or as our neighbor said, “le papa de Bambi” (pronounced Bahm-BEE)! My venison was fabulous – served in two forms – a steak, which I ordered rare (I won a smile and a “Merci” from Bruno for my choice of rare)…

…and also in a croustillant – a crusty spring roll type of pastry, stuffed with braised, shredded venison, flavored by cranberries, and then deep fried. This was crunchy and flaky on the outside, melt-in-your-mouth on the inside. Both preparations were delicious, especially when mopping up the jus infused with juniper berries. I drank a local red wine with this.

For his main course, Jack had ordered grilled rouget grondin fish filets, served over a bouillabaise sauce with rouille (a spicy, garlic & saffron mayonnaise popular across the South of France). His wine was a local rosé.

And look who showed up again, after making his rounds of all the other tables, of course! 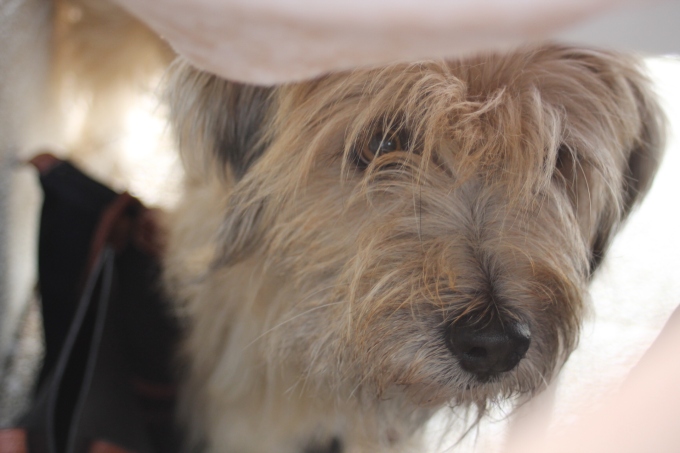 Jack and I then shared the cheese plate, a selection of four local cheeses, to be eaten in a specific order – from mildest to sharpest.

The last two were an aged goat cheese topped with floral-scented honey and walnuts, followed by a mousse the chef had made from Roquefort, which is made in the hills just northwest of here, and sweet wine.

Last but never least, the dessert du moment was a fabulous molten chestnut cake, served warm with a house made caramel ice cream and hazelnut whipped cream. (I may be wrong about the hazelnut part, but that’s what it tasted like to me.)

As always, a good meal like this needs to be finished with a strong cup of espresso. 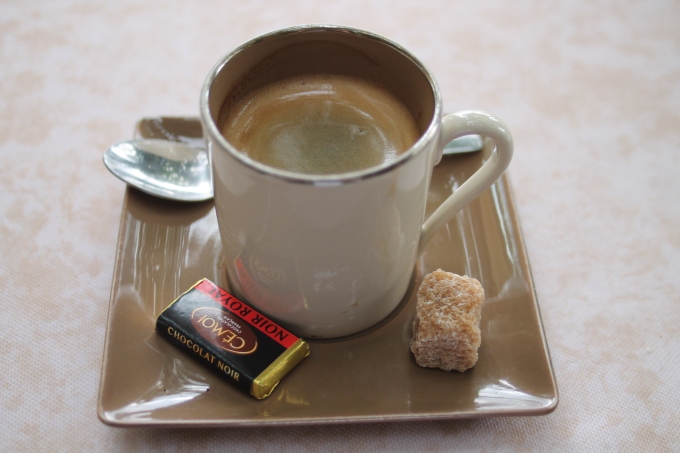 From time to time, during the meal, a barge would float by, just feet from our table. Often, the inhabitants of a barge would wave, and we waved back. 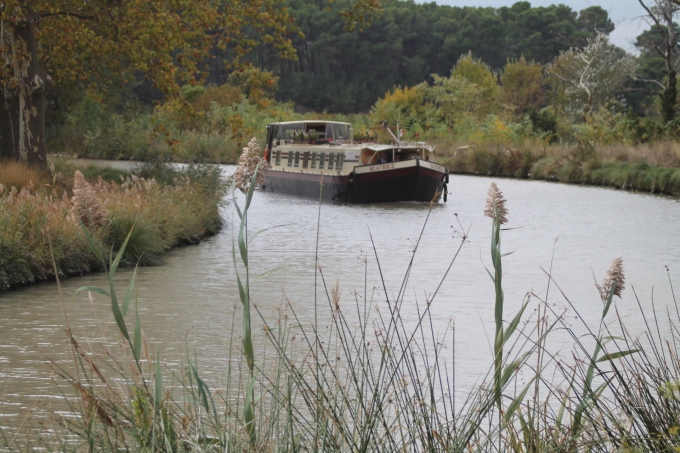 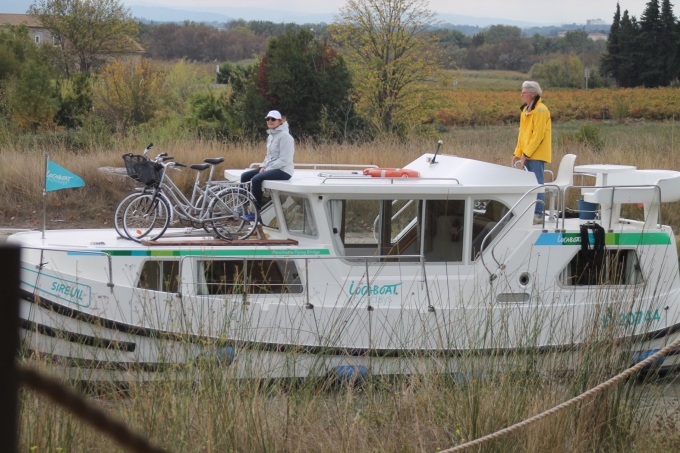 Throughout the meal, we had exchanged light conversation with the couple next to us. When they left, they told us, “bon continuation“, meaning “enjoy the rest of your meal”. We in turn, wished them “bonne route” – a good drive – since they had a ways to travel home to the Aveyron. Jack and I finally took a peaceful stroll along the banks of the canal, before leaving this charming spot.